Roses featured in the 2023 calendar include:
• Miss All-American Beauty – This exquisite bud reminds us that there is
even beauty in the ice crystals of winter.
• Brandenburg Gate – This hybrid tea rose is definitely a Valentine’s special.
• Cream Puff – What a way to welcome Spring!
• Chicago Peace – If April showers result in roses like this, let it rain!
• Chihuly – This gorgeous floribunda that signals all of the wonderful colors of the summer to come was named in honor of noted glass sculptor Dale Chihuly.
• Neptune – Summer has never smelled as sweetly as this intensely fragrant hybrid tea
• Roller Coaster – This single miniature rose almost appears to be hand painted, which is a characteristic of many of the roses hybridized by famous hybridizer Sam McGredy.
• Fitzhugh’s Diamond – This miniflora rose is a perfect gem in the garden, in a vase, or on a show table.
• Crescendo – The name of this hybrid tea rose appears to be extremely
appropriate.
• Colorific – What an easy answer to the trick or treat question of this month.
• Easy Does It – The pumpkin orange color of this floribunda makes it perfect
for this autumn month of thanksgiving.
• Nickelodeon – This miniature rose is reminiscent of the red velvet and white
fur of Santa’s suit. It almost sings “Santa is coming to town!”

Rich Baer is an award-winning rose photographer who has won hundreds of American Rose Society awards over the last 20 years. His photos have appeared in numerous texts and magazines as well as in the catalogues of companies such as Jackson & Perkins; Edmunds’ Roses; Weeks Roses; and Heirloom Roses. of course, Rich’s photography is so good because it is imbued with the passion that he has for roses. not only does he have degrees in botany, plant physiology, and plant pathology that help him to know what it is that creates good roses, but he also has a garden of over 1,000 roses that demonstrates the practical application of that knowledge! The photo above depicts a portion of his garden. in addition, he is an accredited rose horticultural and arrangement judge and is an ARS Master Rosarian. and yes, he sometimes takes hours, or days, to get just the right shot.

About the Portland Rose Society

The Portland Rose Society is the oldest rose society in the United States. It was established in 1889 by Mrs. Henry Pittock, wife of the first publisher of the Portland newspaper The Oregonian, and some of her friends. Their vision was to celebrate the glory of the rose, a goal reached through the dedicated efforts of the members of the Portland Rose Society. Today, the PRS continues this vision in its 132nd year. The mission of the PRS is to educate the public about all facets of rose culture in order to perpetuate the love of the queen of flowers.

The PRS has sustained its purpose of growing and showing the best-of-the-best roses for the enjoyment and education of the citizens of Portland since it held its first rose show in a tent in Mrs. Pittock’s garden. Today the PRS sponsors annual Spring, all-Miniature, and Fall Rose Shows, which are extravaganzas. In addition, the organization has helped establish the Gold Award Garden and the Gold Award Pavilion in the Washington Park International Rose Test Gardens. The PRS also conducts several pruning demonstrations each spring and holds monthly educational meetings to further its mission. Many rose lovers enjoy its monthly newsletter, The Portland Rose Chatter, which contains articles, timely tips, and new insights on rose culture. Finally, the PRS maintains educational booths at garden shows and fairs to encourage the public to grow and enjoy roses.

PRS members are passionate about their favorite flower and America’s popular pastime and hobby of growing roses. They work to continue Portland’s heritage as “the City of Roses” and invite others to join them in perpetuating the love of the rose. To that end, PRS has enlisted the help of award-winning rose photographer Rich Baer in producing this annual calendar. PRS hopes you will enjoy the calendar and join them in their quest to ensure that the rose continues to be “America’s national flower.” 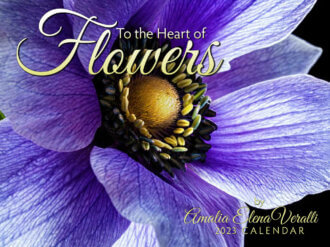 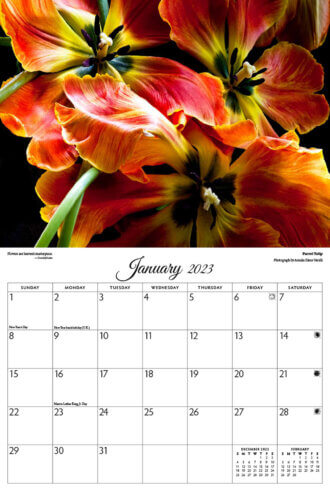 We look at a beautiful flower, but do we actually see it? In Flowers 2023, Amalia Elena Veralli proves herself to be a passionate visual explorer, and her photographs take us on an expedition into the remarkable structure of flowers. Whether observing the entire bloom or seeing into a flower’s core, Flowers by Amalia Elena Veralli reveals the incredible patterns, vaulted canopies, and spires that argue for nature’s place as Earth’s foremost architect.