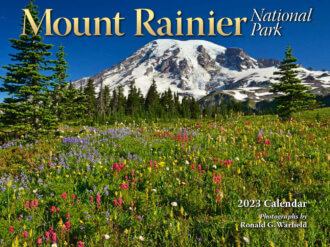 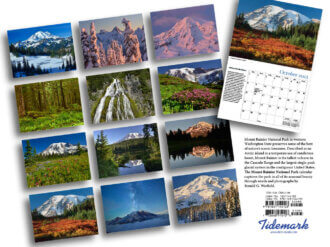 Mount Rainier locations featured in this edition include:
• The season’s first storms frost the ice-covered Mountain and freeze the glacially-carved basin near Chinook Pass into winter.
• Snow-festooned trees catch the warm pastel glow of a setting sun in Edith Creek Basin at Paradise Meadows.
• Mount Rainier basks in a warm pastel glow in the magic hour around sunset.
• When we enter the park via the Carbon River valley, we arrive in an old-growth forest cathedral that only a century ago extended from the base of Mount Rainier to the shores of Puget Sound.
• The clear-flowing Paradise River spills 155 feet over the side of Mazama Ridge and chortles through Paradise Valley.
While subalpine lupine and other wildflowers carpet Edith Creek Basin, snowpacks melt slowly on this eastern face of Alta Vista.
• Mount Rainier, at 14,411 feet in elevation, towers nearly two miles above the fragrant, colorful sea of subalpine wildflowers on the Lakes Trail at Paradise.
• Mount Rainier admires itself in the mirror of Reflection Lake, bathed in warm morning light and framed by subalpine fir and mountain hemlock.
• Seekers of reflections find delight and solace in evenings enjoyed at one of the supreme wildflower meadows in the northwestern corner of the park.
• As the first snows of the approaching winter blanch the upper slopes of Mount Rainier, Paradise Meadow blazes once more.
• In the magic hours after sunset, twilight fades into astronomical darkness and the sky fills with a shimmering veil of brilliantly colored points of light–a starry wilderness.
• Sunset on the shortest day of the year casts a warm glow and strong side lighting on snowflocked subalpine firs near the old Paradise camp. 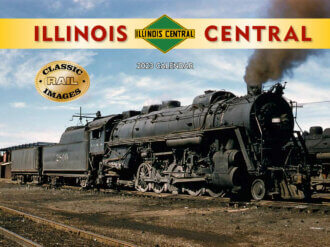 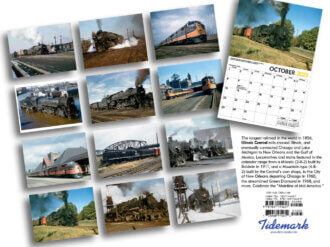 The longest railroad in the world in 1856, Illinois Central rails crossed Illinois, and eventually connected Chicago and Lake Michigan to New Orleans and the Gulf of Mexico. Locomotives and trains featured here range from a Mikado (2-8-2) built by Baldwin in 1911, and a Mountain-type 4-8-2 built by the Central’s own shops, to the City of New Orleans departing Chicago in 1960, the streamlined Green Diamond in 1968, and more. Celebrate the “Mainline of Mid-America.” 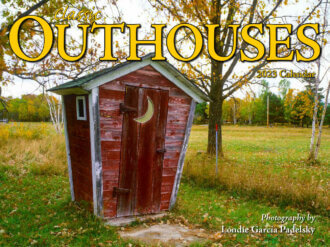 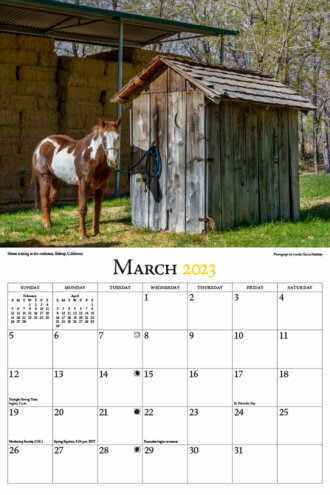 We grapple with vital human needs every day. They inspire great paintings, extraordinary books, symphonies, and cathedrals. Classic Outhouses pictures privies that cross every culture and at special moments are as important as any book or cathedral. . . though a few pages of that book could also prove useful. 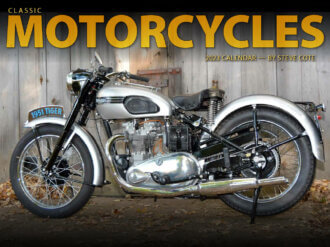 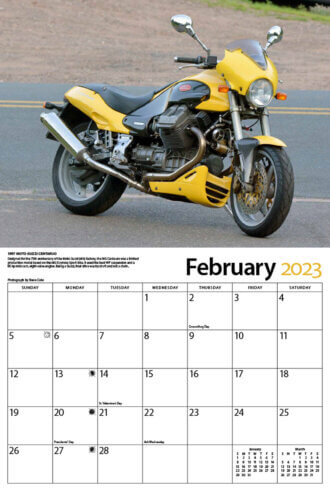 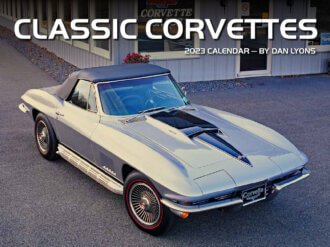 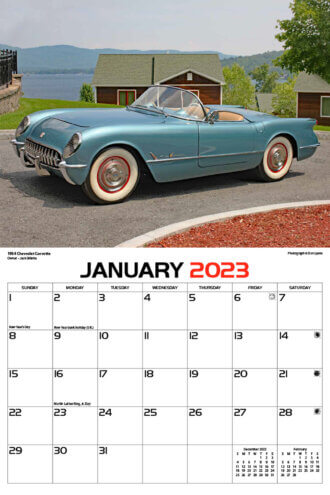 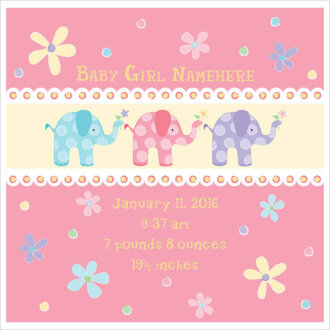 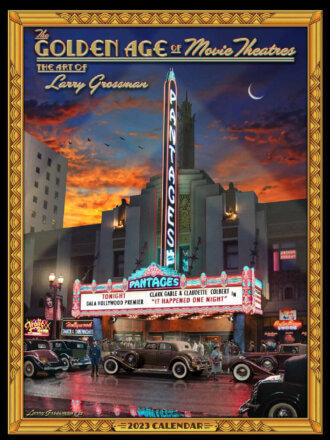 Growing up just a few miles from the heart of Hollywood, artist Larry Grossman has, like so many of us, always loved
going to the movies, especially when it’s to a classic theatre. Whether Baroque, Art Deco, or pure fantasy in design, they were, and still are, the perfect place to feel like part of the action on the silver screen! In love with the styles of the 1930s-50s, Larry created these vivid images to transport us to a time when these fabulous theaters looked just as they did in the Golden Age of film! 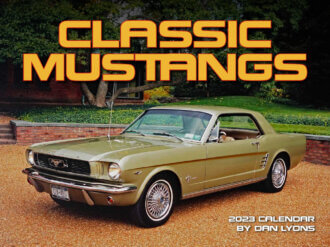 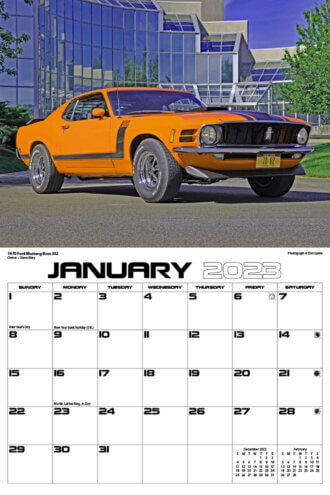 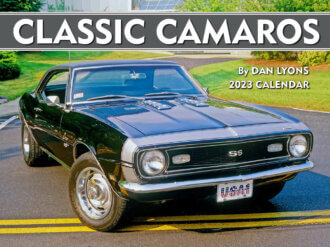 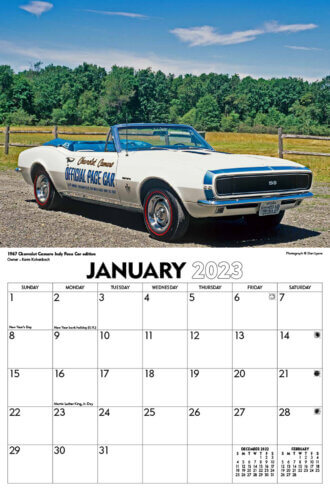 In 1966, General Motors was feeling pony car envy. The automaker needed a car that would leave Ford’s Mustang in the dust. Chevrolet answered the call with the 1967 Camaro. Still kicking up dust after six generations, Classic Camaros features models from the 1967 SS RS convertible and the 1979 Z28, to the 1993 Indy Pace Car edition, the 2002 SS 35th anniversary edition, and more. Dust up! 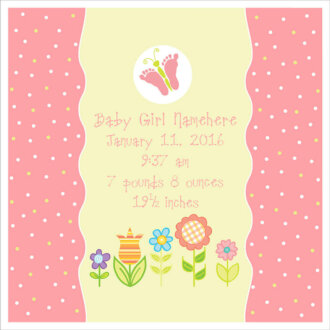 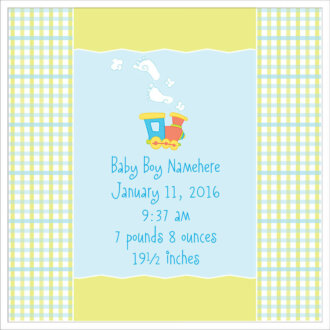 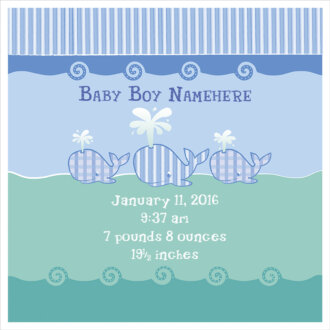